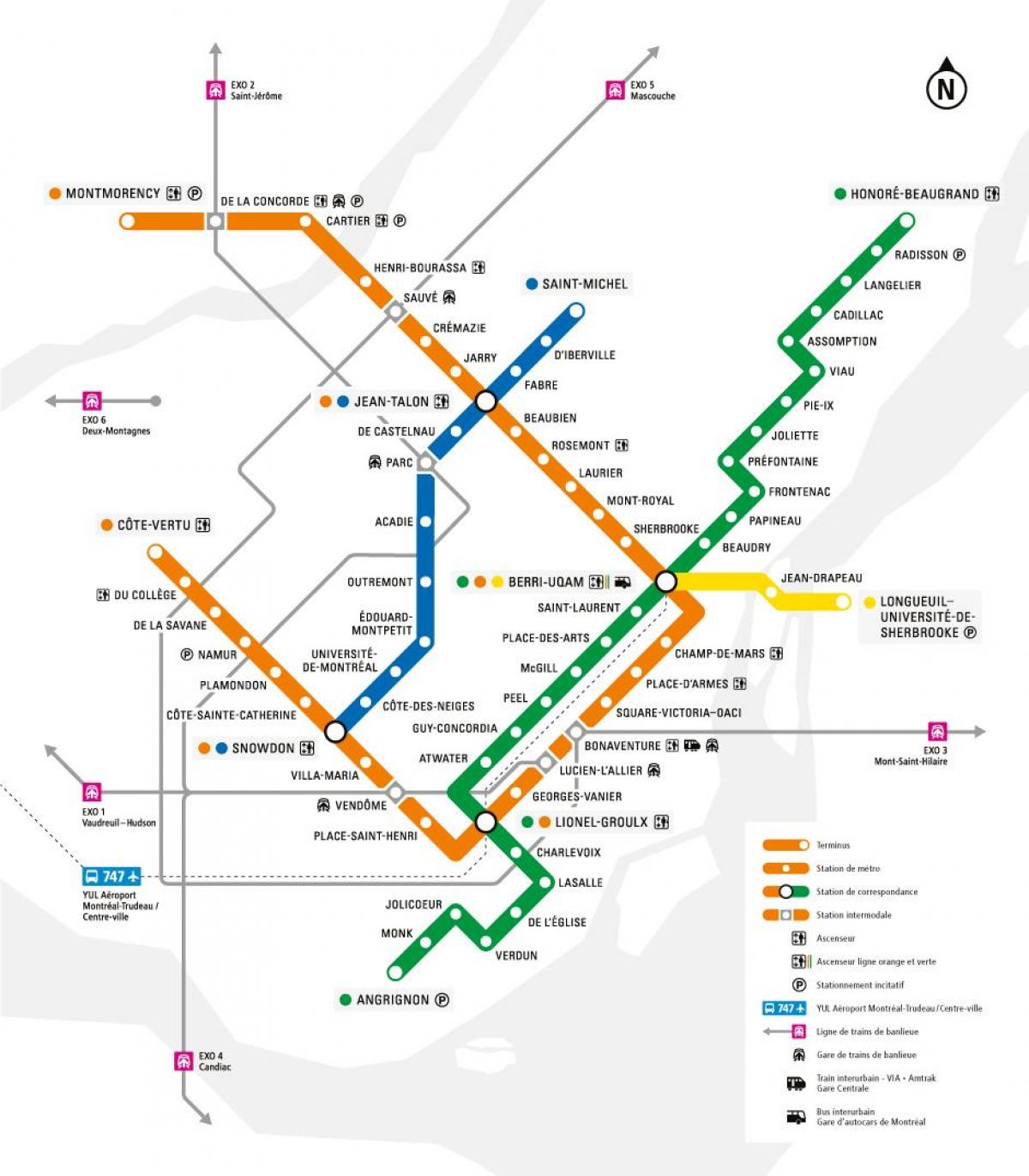 The Montreal Metro (French: Métro de Montréal) is a rubber-tired metro system, and the main form of public transportation underground in the city of Montreal, Quebec, Canada. The Metro, operated by the Société de transport de Montreal (STM), was inaugurated on October 14, 1966, during the tenure of Mayor Jean Drapeau. Originally consisting of 26 stations on three separate lines, the Metro now incorporates 68 stations on four lines measuring 69.2 km (43.00 mi) in length, serving the north, east, and centre of the Island of Montreal with connections to Longueuil, via the Yellow Line, and Laval, via the Orange line as you can see in Metro map Montreal.

Montreal metro system is Canada busiest subway system in total daily passenger usage, serving an average of 1,111,700 daily passengers on an average weekday (as of Q1 2011). In 2011, 308.7 million riders (transfers not included) used the Metro as its shown in Metro map Montreal. According to the STM website the metro system has transported over 7 billion passengers as of 2010, roughly equivalent to the world population. Montreal has built one of North America largest urban rapid transit schemes, serving the third-largest number of passengers overall behind New York and Mexico City, and attracting the second-highest ridership per capita behind New York.

The Montreal Metro was inspired by the Paris Metro and in turn is also the inspiration for the Lyon Metro and Marseille Metro, as well as the Mexico City Metro, all constructed a few years later, and all which also share the same rubber-wheel car design and similar Montreal Metro station architecture. Construction began in May 1962 and was undertaken before Montreal was chosen as host of the 1967 World Fair (Expo 67), held in the summer of 1967. Regardless of the fair, the city badly needed a mass transportation system, as demonstrated by numerous proposals dating back to 1910 as its mentioned in Metro map Montreal. The main lines (Green (Line 1), Atwater to Frontenac; and Orange (Line 2), Bonaventure to Henri-Bourassa) were opened gradually starting in October 1966, with the Yellow line (Line 4) (Berri-de-Montigny to Longueuil, on the south shore of the Saint Lawrence River) not opened until April 1967. 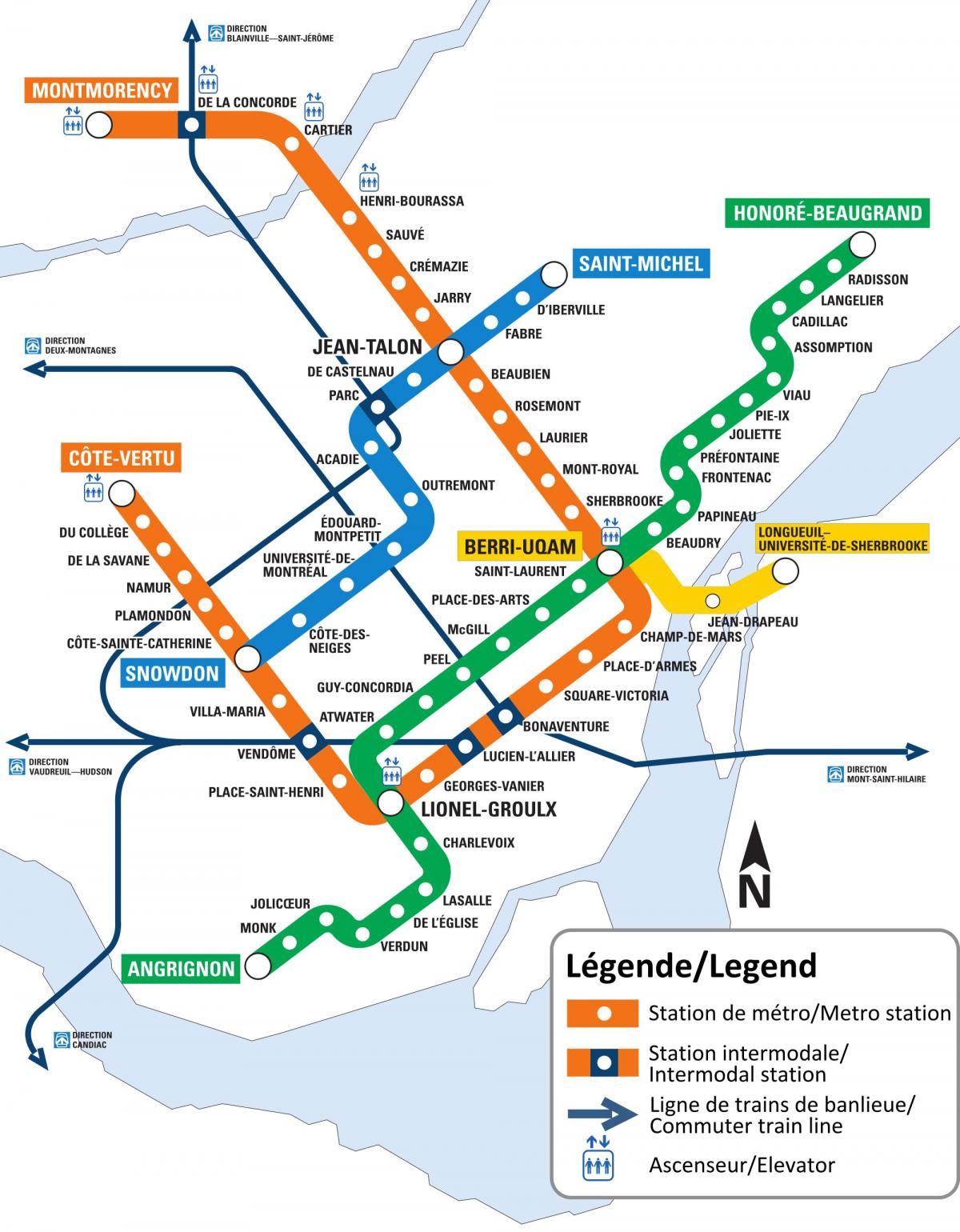 The first subway proposal, dated 1910, was for a single line running underneath Bleury Street and Park Avenue from Craig Street (now St-Antoine Street) all the way to Mont Royal Avenue. The line was to run underground from Craig to Pine Avenue. An eventual expansion up Saint Laurent Boulevard to De Montigny was also contemplated at the time. In 1944, the Montreal Tramways Company proposed a 2-line network, running underneath Rue Sainte-Catherine from Square Cabot (Rue Atwater) to Avenue Papineau, and a second line under St-Denis Street (from Jean-Talon to Notre-Dame), then turning westwards under Notre-Dame and St-Jacques Street all the way to Rue Guy, then turning north and connecting with the other line at Guy as you can see in Montreal subway map. Proposed extensions were to run northward under De Lorimier up to Beaubien, eastward from De Lorimier to Viau under Rue Ontario, northward Chemin Côte-des-Neiges and Queen-Mary to Snowdon (Décarie), westward under Sherbrooke to Girouard, and southwards under Wellington, Centre and Verdun to 1ère Avenue in Verdun.

The four Montreal subway lines are identified by colour, by number, or by terminus station. The terminus station in the direction of travel is used to differentiate between directions of travel. The busiest line is the Orange Line, while the quietest is the Blue Line. The Yellow Line is the shortest line, with three stations, built for Expo 67 as its shown in Montreal subway map. On April 28, 2007, three new stations were opened in Laval along the Orange Line. Metro lines that leave the Île de Montréal are the Orange Line, which continues to Laval, and the Yellow Line, which continues to Longueuil. On weekdays and Saturday and Sundays, the Metro service runs from approximately 5:30 a.m. to 1:00 a.m. on the Green, Orange and Yellow lines and 5:30 a.m. to 12:15 a.m. on the Blue line.

Maintenance of Montreal subway cars is rigorous, as reliability levels (Mean Distance Between Failures/MDBF ratings) are more than double that of typical North American subway cars. The MR-63 is the first generation of high-performance subway cars, a mixture of technology dating back to the mid-1960s and modern train technology as its mentioned in Montreal subway map. The MR-63 model has undergone numerous technological and reliability upgrades. Major upgrades include on-board computer modules for automatic train control in 1976 with subsequent revisions of hardware and software, solid-state door interlocks in 2003, modern ergonomic driver cabs with new digital dashboards, and automatic station annunciators in 2005. Most notably, all the MR-63 carshells emerged factory-fresh with new interiors and a new paint scheme after being fully refurbished at the GEC Alstom Pointe St. Charles workshops in 1993. As a result, the MR-63 fleet appears relatively new, gleaming and modern despite their age.