You can find on this page the Montreal trains map to print and to download in PDF. The Montreal trains map presents the rail network and railway stations of the trains of Montreal in Quebec - Canada.
Montrealers commuting in from suburbs like Mont St-Hilaire or Vaudreuil swear by the Exo train service (see Montreal train map). If you are staying in the city center, this wont be of interest, but if you plan on exploring neighboring towns, this will be your best bet. 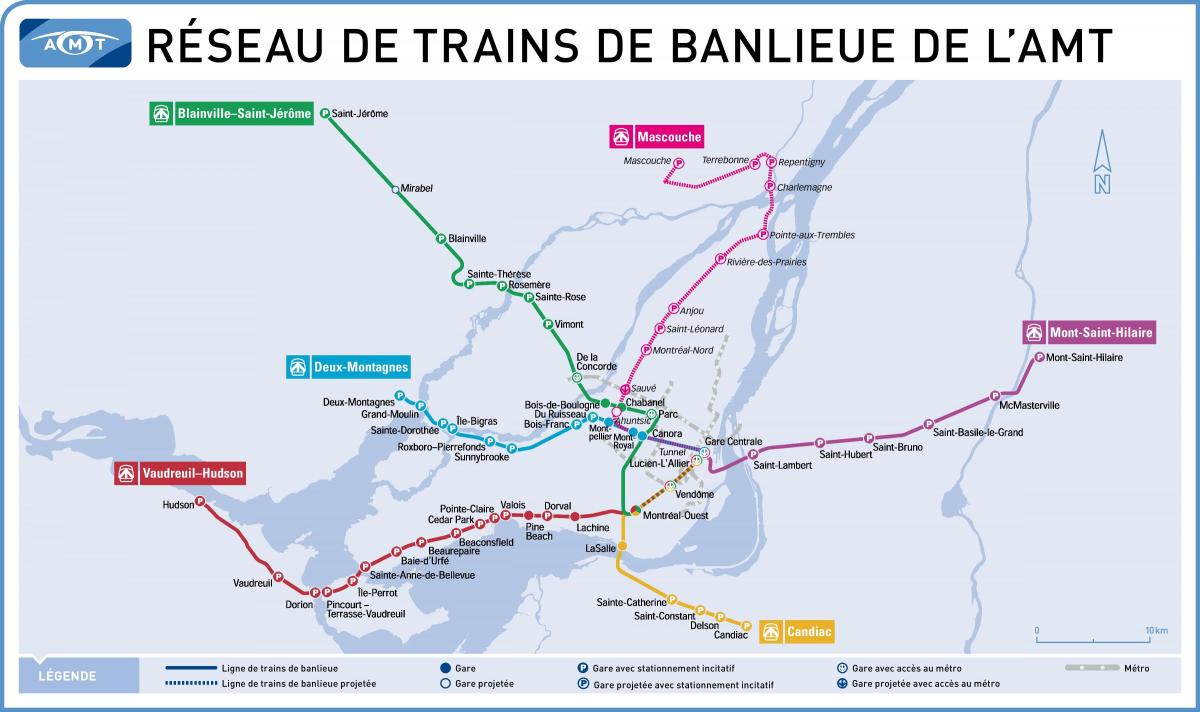 VIA Rail, which is headquartered in Montreal, provides rail service to other cities in Canada, particularly to Quebec City and Toronto with several trains daily on its Quebec City-Windsor Corridor. Amtrak, the U.S. national passenger rail system, also provides service to Montreal, operating its Adirondack daily between Montreal and New York City. All intercity trains and most commuter trains operate out of Central Station as you can see in Montreal rail map. The rest of the commuter trains operate out of the Lucien-L'Allier Station or at Parc metro station. Some of the trains ending their route at Parc metro station have a Trainbus which is an express bus that links downtown Montreal to the station. The bus schedule is synchronized to the train departures.

The commuter rail system in Montreal is managed and operated by the Agence métropolitaine de transport, and extends across several municipalities as its shown in Montreal rail map. Canadian Pacific Railway (CPR), which is now headquartered in Calgary, Alberta, was founded here in 1881. Its corporate headquarters occupied Windsor Station at 910 Peel Street until 1995. With the Port of Montreal kept open year round by icebreakers, lines to Eastern Canada became surplus, and now Montreal is the railway eastern and intermodal freight terminus. The Port of Montreal provides a highly efficient intermodal platform. The Port operates its own railway network on its territory, with close to 100 kilometres (60 miles) of track and direct access to the various berths. Container convoys are assembled alongside the ships.

CPR connects at Montreal with the Port of Montreal, the Delaware & Hudson Railway to New York, the Quebec-Gatineau Railway to Quebec City and Buckingham, the Montreal, Maine & Atlantic to Halifax, and CN Rail as its mentioned in Montreal rail map. The CPR flagship train, The Canadian, once ran daily from Windsor Station to Vancouver, all passenger services have since been transferred to VIA Rail Canada, although CPR operates certain AMT trains under contract to the Quebec government. Montreal-based Canadian National Railways (CN) was formed during in 1919 by the Canadian Government following a series of country-wide rail bankruptcies. CN was formed from the lines of the Grand Trunk, Midland and Canadian Northern Railways, and has risen to become CPR chief rival in freight carriage in Canada. Like the CPR, CN has divested itself of passenger services in favour of VIA Rail Canada. CN operates the electric Mont Royal AMT line under contract to the Government of Quebec.