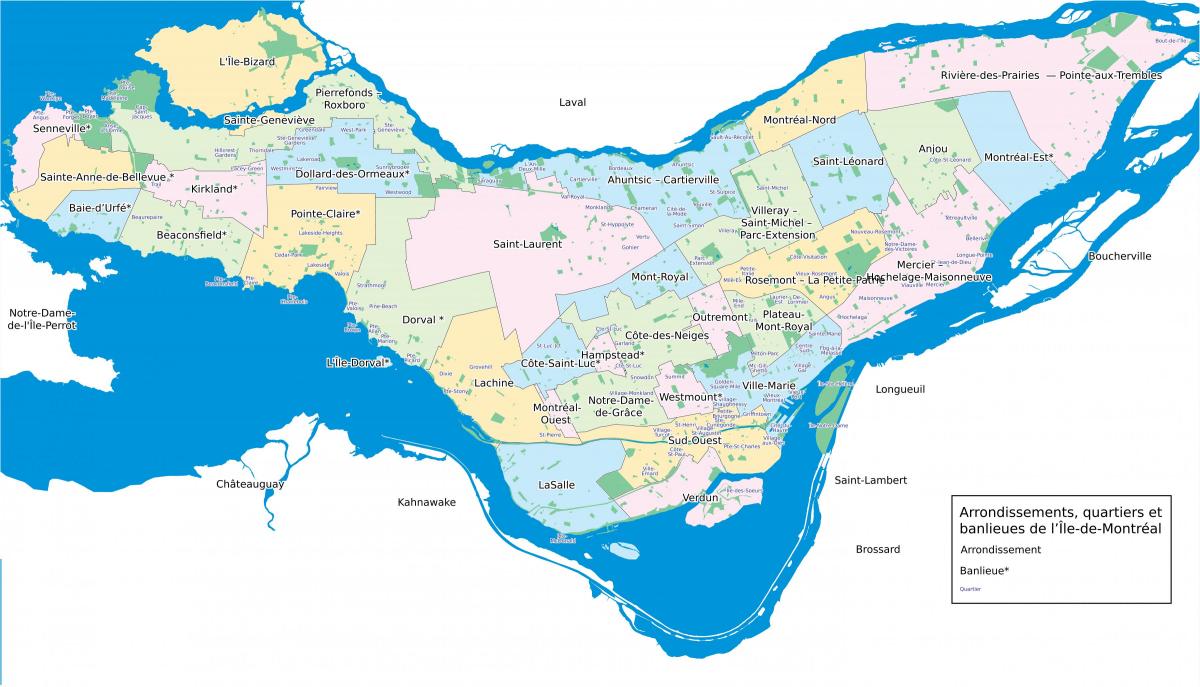 The city of Montreal is composed of 19 large boroughs which are further subdivided into smaller neighbourhoods. The boroughs are Ahuntsic-Cartierville, Anjou, Côte-des-Neiges–Notre-Dame-de-Grâce, Lachine, LaSalle, Le Plateau-Mont-Royal, Le Sud-Ouest, L'Île-Bizard–Sainte-Geneviève, Mercier–Hochelaga-Maisonneuve, Montréal-Nord, Outremont, Pierrefonds-Roxboro, Rivière-des-Prairies–Pointe-aux-Trembles, Rosemont–La Petite-Patrie, Saint-Laurent, Saint Leonard, Verdun, Ville-Marie and Villeray–Saint-Michel–Parc-Extension as you can see in Montreal neighborhoods map. Other notable neighbourhoods in Montreal include the multicultural areas of Notre-Dame-de-Grâce and Côte-des-Neiges in the Côte-des-Neiges–Notre-Dame-de-Grâce borough, as well as Little Italy in the borough of Rosemont–La Petite-Patrie and Hochelaga-Maisonneuve, home of Montreal Olympic Stadium in the borough of Mercier–Hochelaga-Maisonneuve.

The borough with the most neighbourhoods is Ville-Marie, which includes the city downtown, the historical district of Old Montreal, Chinatown, the Gay Village, the Latin Quarter, the recently gentrified Quartier international and Cité Multimédia as well as the Quartier des Spectacles which is currently under development. Other neighbourhoods of interest in the borough include the affluent Golden Square Mile neighbourhood at the foot of Mount Royal and the Shaughnessy Village/Quartier Concordia area home to thousands of students at Concordia University. The borough also comprises most of Mount Royal Park, Saint Helen Island, and Île Notre-Dame as its shown in Montreal neighborhoods map. The Sud-Ouest borough was home to much of the city industry during the late 19th and early-to-mid 20th century. The borough historically included Goose Village and is home to the traditionally working-class Irish neighbourhoods of Griffintown and Pointe-Saint-Charles as well as the low-income neighbourhoods of Saint-Henri and Little Burgundy.

The Plateau Mont-Royal borough has historically been a working-class francophone area as its mentioned in Montreal neighborhoods map. The largest neighbourhood is the Plateau (not to be confused with the whole borough), which is currently undergoing considerable gentrification, and a 2001 study deemed it as Canada most creative neighbourhood because 8% of its labour force is composed of artists. The neighbourhood of Mile End in the northwestern part of the borough, has historically been a very multicultural area of the city, and features two of Montreal well-known bagel establishments, St-Viateur Bagel and Fairmount Bagel. The McGill Ghetto is located in the extreme southwestern portion of the borough, its name being derived from the fact that it is home to thousands of McGill University students and faculty members. 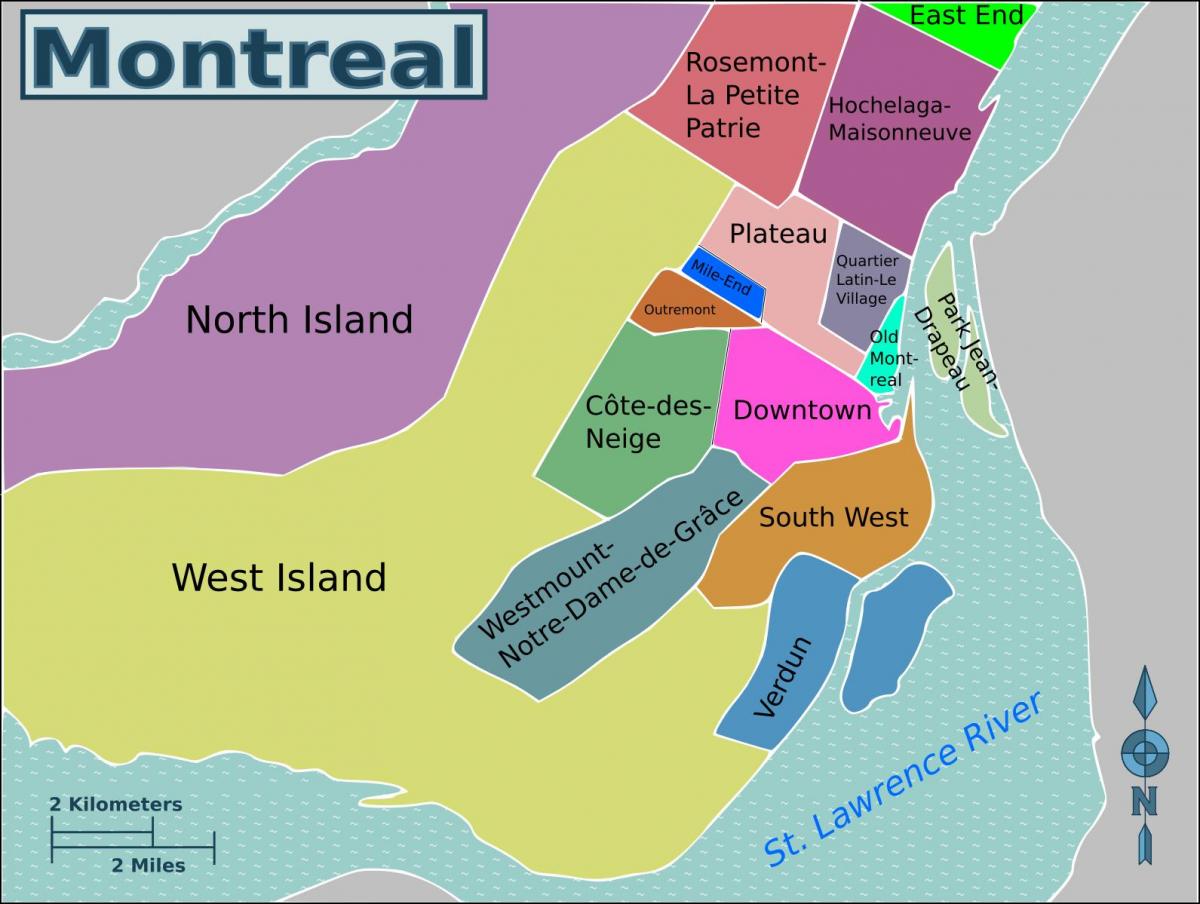 The city of Montreal is divided into 19 boroughs (in French, arrondissements) as you can see in Montreal districts map, each with a mayor and council. Without a doubt, the Downtown neighbourhood is home to the fullest expression of the diversity of Montreal: from the architecture to the cultural offerings by way of the demographics, the Ville-Marie borough is a vibrant destination and a good choice for new arrivals who wish to dive head first into their new lives. It is the district for business, live concerts and shows, museums, excursions, restaurants. The Jean Talon Market is an inescapable institution in the culinary life of Montreal, and Little Italy still attracts epicureans, tourists and locals, two generations after the wave of Italian immigration that followed the second world war. Officially, Little Italy is part of the Rosement-la-Petite-Patrie borough, but part of the core of this colourful and warm neighbourhood spills over into the neighbouring district of Villeray.

The location of Outremont, on the other side of Mount Royal from downtown as its shown in Montreal districts map, provides the name for this upscale district, the francophone counterpart of Westmount. The location also creates a calm and tranquil neighbourhood, with a lot of greenery, large trees, climbing ivy, parks, and private yards. The Plateau and Mile-End, it is the preferred district of the French who immigrate to Montreal, and it is easy to understand why. A bohemian ambiance, specialty food shops, independent boutiques, small cafes and restaurants, the Plateau and Mile-End cultivate the art of European living. Côtes-des-Neiges & NDG, student bars in Côtes-des-Neiges versus family brunch in Notre-Dame-de-Grâce, the borough has two distinct faces. Nevertheless, the two neighbourhoods have much in common. Perfect examples of Canadian multiculturalism, they both offer major social and intellectual diversity.

The profiles of the electoral districts present a set of characteristics of the population living in the territories of each of the districts as its mentioned in Montreal districts map: the total population by sex and age groups, the composition of households and families, the countries of birth of the population. immigrant, languages ​​as well as some socio-economic characteristics including education, unemployment rate, total income, housing costs and average household expenses. As part of the general election of November 5, 2017, the territory of the city of Montreal, including its 19 boroughs, remained divided into 58 electoral districts as in 2013, but the limits of some of them have been modified. The 2017 profiles are therefore based on the new breakdown in force.