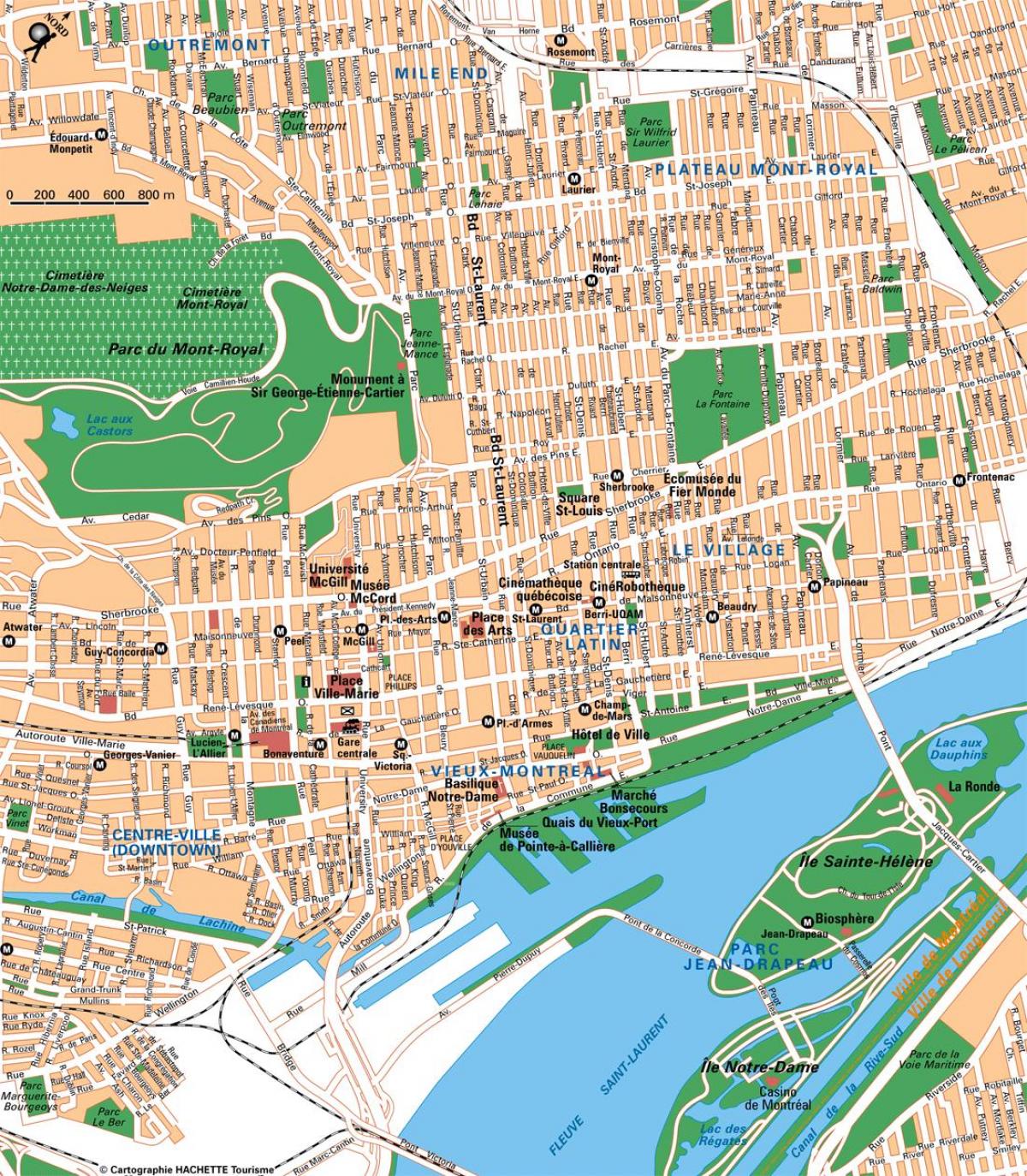 Since Montreal is on an island, the directions used in the city plan do not precisely correspond with compass directions, as they are oriented to the geography of the island. North and south are defined on an axis roughly perpendicular to the St. Lawrence River and the Rivière des Prairies: North is towards the Rivière des Prairies, and south is towards the St. Lawrence. East (downstream) and west (upstream) directions are defined as roughly parallel to the St. Lawrence River and the Rivière des Prairies, despite the fact that both rivers flow from the southwest to the northeast. Saint Lawrence Boulevard as you can see in Montreal streets map, also known as "The Main," divides Montreal into east and west sectors. Streets that cut across Saint Laurent Boulevard undergo a name change, in that Est or Ouest are appended to their names. In the past, a number of streets had both English and French names, such as "avenue du Parc" or "Park Avenue", "rue de la Montagne" or "Mountain Street", "rue Saint-Jacques" or "Saint James Street". Some of these names are still in common colloquial use in English, and perpetuated by the tourism industry. Many streets incorporate an English specific name into French, such as "chemin Queen Mary", "rue University", "avenue McGill College".

Montreal treets that do not cross the Main do not generally contain a cardinal direction at the end of their names. Address numbering begins at one at Saint Lawrence Boulevard as its shown in Montreal streets map. The numbers increase as you move away from the boulevard. On north-south streets, house numbers begin at the Saint Lawrence River and the Lachine Canal and increase to the north. Odd numbers are on the east or north sides of the street, with even numbers on the west or south sides. Numbered streets generally run north and south, and the street numbers increase to the east. Moreover, the addresses are on a grid-axis system, as in many North American cities. Streets generally retain their grid position throughout their course, even if they are slightly diagonal. Most streets in Montreal do not change name throughout their course, respecting their grid axis. Streets such as Saint Laurent Boulevard, Papineau Ave., De Lorimier Ave. and Pie-IX Blvd. have a foot in both rivers, and some streets re-commence despite gaps or interruptions.There are a few notable exceptions which continue for historical reasons. A few north-south streets which begin in Old Montreal change name at Saint Antoine Street (formerly Craig Street), site of the former city wall (Saint-Pierre → Bleury → Park Avenue, Bonsecours → Saint-Denis). Only one street changes name many times: McGill Street → Square-Victoria Street → Beaver Hall Hill → Frère-André Place → Phillips Place → Phillips Square → Aylmer St. 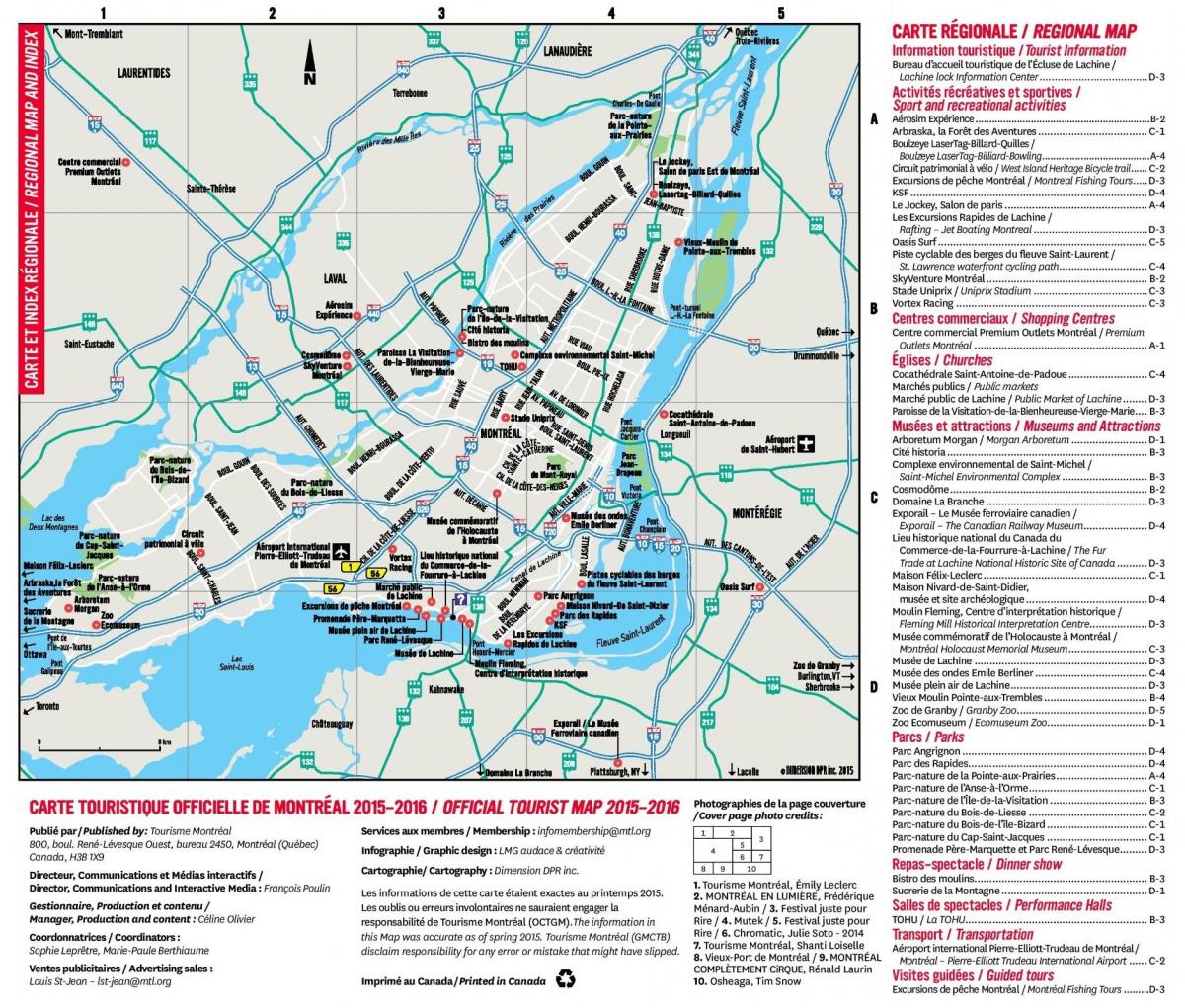 The island of Montreal is a hub for the Quebec Autoroute system, and is served by Quebec Autoroutes A-10 (known as the Bonaventure Expressway on the island of Montreal), A-15 (aka the Decarie Expressway south of the A-40 and the Laurentian Autoroute to the north of it), A-13 (aka Chomedey Autoroute), A-20, A-25, A-40 (part of the Trans-Canada Highway system, and known as "The Metropolitan" or simply "The Met" in its elevated mid-town section), A-520, and A-720 (aka the Ville-Marie Autoroute) as its shown in Montreal roads map. Many of these Autoroutes are frequently congested at rush hour. However, in recent years, the government has acknowledged this problem and is working on long-term solutions to alleviate the congestion. One such example is the extension of Quebec Autoroute 30 on Montreal south shore, which will serve as a bypass.

Montreal Turcot Interchange dwarfs Spaghetti Junction at Gravelly Hill Interchange on the M6 in Birmingham as its mentioned in Montreal roads map. Now that a major remodelling project is complete, it also outdoes the UK interchange green credentials. Main contractor KPH Turcot – comprising Kiewit, Parsons and CRH with WSP as lead designer – recently completed the six year C$3.7bn (£2bn) scheme to rebuild the Canadian motorway junction. The project is not only carbon neutral, it has created 31ha of new green space from what was once a concrete jungle. The interchange is a multi-level elevated road system with multiple structures connecting Autoroutes 15, 20 and 720. It is a vital local and regional link as it is on a key route between Montreal-Trudeau International Airport and the city downtown area.